Located just 30 kilometres from Barcelona in the Catalonia Audiovisual Park in Terrassa, it covers an area of 3,000 square metres over two floors: the ground floor, at street level, with an area of 750 square metres, is where the tasks associated with the material take place, i.e. their reception, inspection, adjustment, cataloguing and intake... through to their digitisation or restoration. The basement level, covering 2,250 square metres, is set aside for the long-term storage of photochemical material.

With around 40,000 titles from every era and every genre, its collections reflect the history of Catalan film and cinema in Catalonia.

The 2CR has all the necessary equipment and facilities to safeguard and work with all kinds of photochemical and digital films, organised into different areas or sections.

Spaces set aside for reception, inspection and cataloguing:

Reception room: All movements of material, whether arriving at or leaving the 2CR, must be logged, and each film document prepared before being sent on to other working facilities. The facility is equipped with a gas extraction system to facilitate the changeover of film cans without exposure to the gases given off by this type of film.

Positives Room: the distribution and projection copies, in all kinds of systems and formats, whether for professional use, such as 35 mm, or amateur, such as 16 mm and 9.5 mm, are inspected and catalogued in this room, which has two viewing tables, one manual inspection table, a gas extraction system and a cataloguing unit.

New Room: equipped to work with both new audiovisual productions and new photochemical materials from restoration or preservation work that reach the 2CR, whether digital or photochemical. It has two viewing tables, one manual inspection table, and two cataloguing units.

Negatives Room: the collection of original negatives of Catalan films, sourced from laboratories that have now closed, includes about 60,000 cans and has some special requirements; this room is equipped with a double viewing table (16 mm and 35 mm, with magnetic and optical sound), four manual inspection tables, an automatic inspection table, a synchronizer to compare different versions, two gas extraction systems, and a machine to clean films by ultrasonic cavitation. 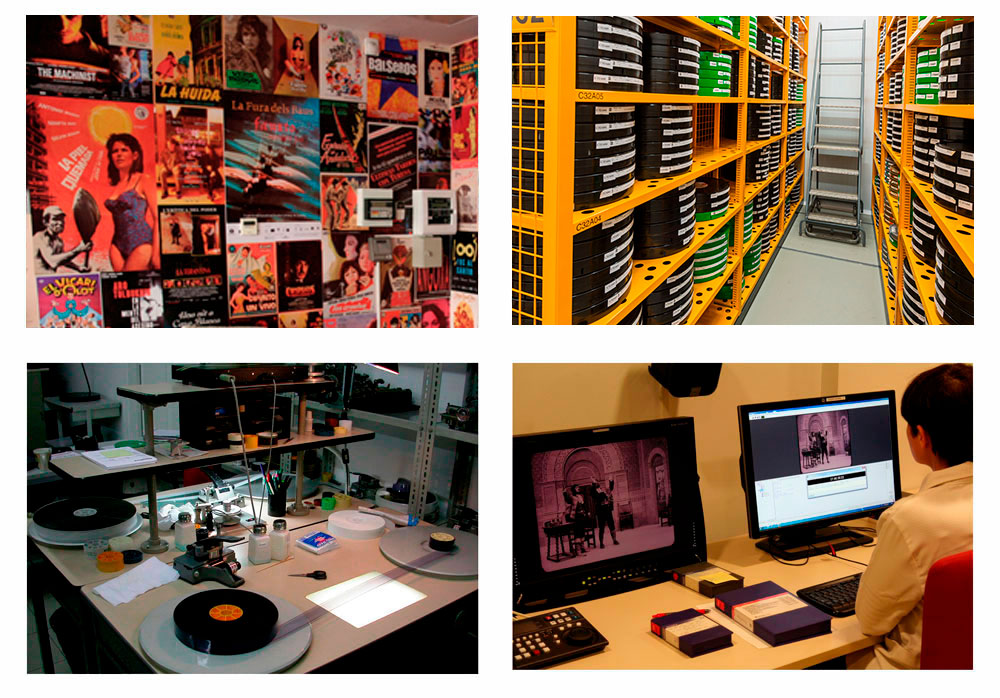 This is the system in which all the machinery and computer devices come together to perform the tasks of capturing image and sound, scanning and telecine (transferring motion picture film to video); digital processing, image and sound restoration, and colour correction; and the codification of digital documents for long-term conservation or dissemination:

A Northlight 1 film scanner from Filmlight, with up to 6K resolution which, combined with a very film-friendly drive system, makes it possible to implement the restoration of the vintage film collection, from 1896 to 1914, which are exceptionally fragile and pose major conservation challenges.

Telecine room: for materials that are in a good state of preservation but have no equipment for accessing them, a telecine is made to facilitate their dissemination and viewing. We use a DIXI telecine from CTM which has been adapted with a video camera with a resolution of up to 4K for 35 mm and 16 mm material.

Colour Room: all scanned or tele-filmed material needs colour correction to a greater or lesser extent; this process is carried out with Resolve software and is a key step to ensure that once these analogue films, which were made on photochemical systems, have been digitised, they will be as similar as possible to their original version and how they were seen.

Digital Room: four stations for digital restoration using Diamant software to stabilise the film, eliminate any damage from its use, and make the final frame or ‘crop’. Two editing stations. One station for the intake, inspection and creation of DCP and other digital formats. A technical space housing the computer and audiovisual equipment, such as the 63TB production SAN, memory space for the scanner and 30TB telecine, and the systems and connections for the long-term digital preservation system, located outside the 2CR.

Amateur Projection Room: Equipped with a Filmfabriek film scanner with a resolution of up to 4K, specially designed for amateur material of 9.5 mm and 8 mm.

This refers to all the spaces that are designed and equipped to extend the useful life of each document as far as possible; in the case of photochemical film heritage, these conditions are: low temperature and relative humidity, and air renewal, combined with redundant systems that guarantee the stability of these parameters, and internal and external security to restrict and minimise any risk to the collection, such as fire-fighting systems and intrusion alarms. The 18 long-term deposits are located in the underground area to protect them from the sun and minimise energy costs, and are divided into two sections depending on the plastic medium:

On the ground floor there are four adaptation chambers with temperatures ranging from 10°C to 21°C and a RH of 40% to 65%, and vice versa, for adapting films to both long-term storage and working conditions.

The contents of the digitised film collections are available to producers and institutions looking for images for new audiovisual productions. The collections can also be loaned to other cultural and educational centres and institutions and festivals that want to give their audiences a closer insight into film projections. Use the form below to submit a loan application.

The preservation and restoration work of the Filmoteca has culminated in certain cases in the production of retrospective anthological DVDs, such as those dedicated to Segundo de Chomón, Antoni Padrós and Jacinto Esteva. The most recent production, in collaboration with Intermedio, was dedicated to Llorenç Llobet Gràcia, with two versions of his Vida en sombras (Life in Shadows) after restoration, along with 22 amateur short films and the documentary Bajo el signo de las sombras (Under the Sign of the Shadows), directed by Ferran Alberich, who was also responsible for its restoration. The films are supported by articles by Daniel Sánchez Salas, Ferran Alberich and Esteve Riambau and a theoretical introduction by historian Daniel Sánchez Salas

A selection from our collections, notably those of Laya Films and Segundo de Chomón, can be consulted online through the European Film Gateway..

Mémoire filmique Pyrénées-Méditerranée is a joint project with the Cinémathèque de Toulouse, the Jean Vigo Institute of Perpignan, and the Image and Sound Archive of Mallorca, and compiles films associated with this region bordered by the Pyrenees and the Mediterranean Sea.

I-Media-Cities is a Europe-wide project that aims to implement a film research and indexing system for researchers and scholars in the fields of humanities and social sciences. Organised by film societies and universities, it revolves around nine European cities and the films that portray them. Combined with the academic world, this initiative brings new ways of understanding cities, urban planning, transport, tourism, and political and gender issues, based on the content of the films and in comparison with the other cities.